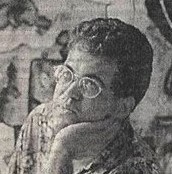 The creative coordinates of Pedro Vizcaíno’s art stem from the late 1980s era. The explosion of the Volumen I exhibition and the subsequent emergence of a “Cuban avant-garde theory” steeped in the contributions of Western postmodern thought—boldly defying official cultural models from the Eastern Bloc—as well as the rise of a new model of art education around the workshops of the Instituto Superior de Arte, brought about a gradual but permanent change (not without its own contradictions) in the paradigms of Cuban art. All of these directly influenced the artist’s métier. “Doomed” to discover international art in the glossy pages of art magazines and old slides from History of Art courses, Vizcaíno transmuted his inability to travel and lack of first-hand access to key artworks into a critical, ironic distance from the traditions of art. Vizcaíno used characters borrowed from American and Cuban comics, imbibed (from books) New York graffiti of the 1970s that had been praised by Norman Mailer, and chose as authoritative sources such contemporary figures as Kenny Scharf, Keith Haring, and Jonathan Borofsky, as well as German Neo-Expressionism and Pop artists such as Roy Lichtenstein, Andy Warhol, and Ray Johnson. He distilled these sources through his peculiar Neo-Expressionistic temperament and his urgent need to express the convulsed dynamics of a reality both internal and external. —Abelardo G. Mena Chicuri 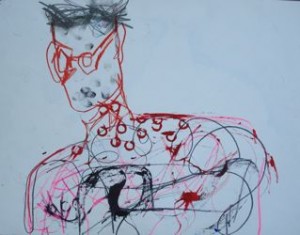 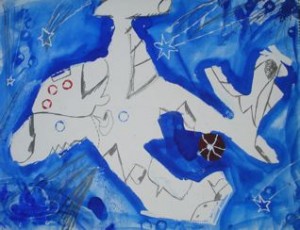 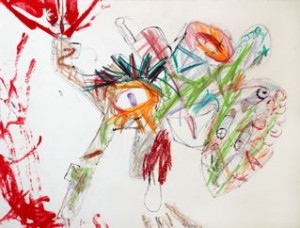 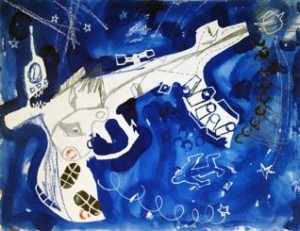 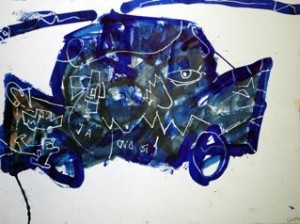