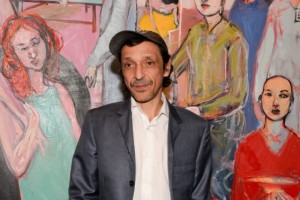 Born 1966, Havana, CubaSomething strange happens when Carlos Quintana paints. He goes into a meditative state not unlike that of Sufi Dervishes who spin round and round until they reach a state of bliss. Quintana, though, reaches a different kind of place, a place where an act of mischief is magically transformed into an eloquent work of art. But magic is only one part of the process. “[Painting] is something physical for me,” he tells Havana Cultura, “with violent movements, effort, truth…”Quintana paints on giant surfaces, turning his canvasses upside-down as if to free his paint to drip in new directions. He spreads the paint with his hands. He dilutes colours with turpentine or with his own saliva. “Sometimes I even piss on my paintings,” he says, “so, yes, I interact with them in different ways.”